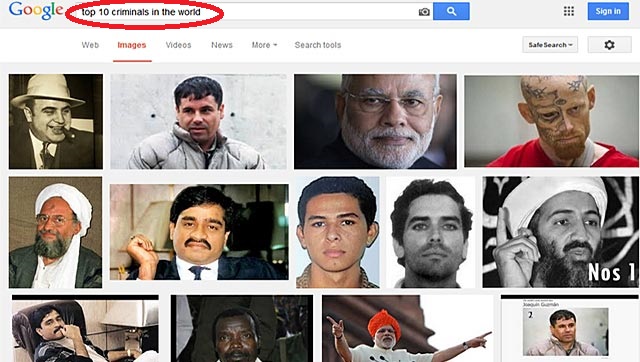 Dear Friends
Google images show PM Modi in top 10 criminals in the world – We get a latest news about India’s Prime Minister Mr.Narendra Modi. As per hindustantimes.com Prime Minister Narendra Modi’s image featured in top 10 criminals of the world in Google search engine on Wednesday. Though the internet giant issued a statement, apologizing for ‘any confusion or misunderstanding’, but the image continued to appear in the search till late in the night.

After this Hundreds of angry Indians have taken to Twitter to express their objection over Google throwing up images of prime minister Narendra Modi, among others, when someone searches for “Top 10 Indian criminals.”

“These results trouble us and are not reflective of the opinions of Google. Sometimes, the way images are described on the internet can yield surprising results to specific queries. We apologise for any confusion or misunderstanding this has caused. We’re continually working to improve our algorithms to prevent unexpected results like this,” a Google spokesperson said in a statement.

“We apologies for any confusion or misunderstanding this has caused,” a Google statement said.
And

Google said that results to the query “top 10 criminals in India” was due to a British daily which had an image of Mr.Modi and erroneous metadata.
It said that in this case, the image search results were drawn from multiple news articles with images of Modi, covering the prime minister’s statements with regard to politicians with criminal backgrounds, but added that the news articles do not link Modi to criminal activity, and the words just appeared in close proximity to each other.