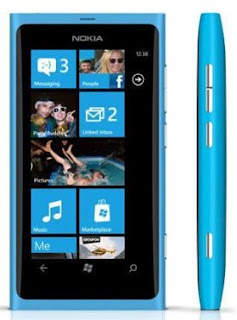 Nokia the worlds largest mobile phone manufacturer has revealed their new ending season smart phone the Nokia Lumia 800 which is a class in its own. It comes with the Windows Operating System Mango 7.5, so you can check out the brief review below we have gathered for you all.

Nokia Lumia 800 comes with Amoled Capacitive Touch screen with a size of 480 x 800 that’s 3.7 inches, which is bright and protected by its hard shell.

Nokia Lumia 800 comes with a fixed memory of 16 GB which is not expandable and 512 MB RAM.

Nokia Lumia 800 comes with the Windows Mango 7.5 Operating System which is the latest operating system currently released by Microsoft. If we talk about the sensors than it has Accelerometer, Proximity, Compass.

Its comes in three different colors you can choose from Black, Cyan and Magenta, and from my point of view the black one is best to go with as it has the best finishing i just saw.