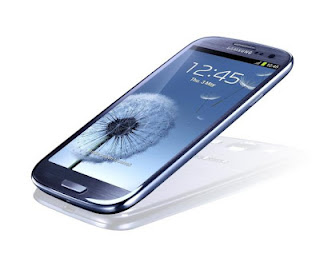 While unveiling the smartphone, J.K. Shin, president and Head of IT and Mobile Communication Division of Samsung Electronics said it is the best in the class smartphone. It “sees you, listens you and understands your needs”, he said, adding that the smartphone recognises your eye movements.
# Features and Specifications of  Samsung Galaxy S III
The Galaxy S III has come with a 4.8-inch Super AMOLED 1,

280-by-720 display, and runs Android 4.0 Ice Cream Sandwich. It features an 8-megapixel rear-facing camera and 1.9-megapixel front-facing one.  The phone, available in two colours — Pebble Blue and Marble White — weighs 133 grams and is 8.6 mm thick.

Samsung Claims that  the phone is inspired by nature and features ‘S Voice’, an advanced natural language user interface, which would listen and respond to the words of the user. “In addition to allowing information search and basic device-user communication, S Voice presents powerful functions in regards to device control and commands.” This includes asking the Galaxy S III to play your favourite songs, adjust the volume, send text messages and emails, organize schedules, or automatically launch the camera and capture a photos